It was about a year ago that I participated in a panel discussion around the subject of knowledge preservation. It was convened at the Government Technology Week in Ottawa Canada in October 2006. The exchanges amongst the panelists started well in advance of the event and they churned up a lot of things to consider. As usual, I played the role of the provocateur.

In the preparations for the panel discussion, which consequently went very well and sparked a fruitful exchange with a fair-sized audience, I floated an illustration. We collectively decided that its complexity disqualified it from being used in that particular forum. I realize now that this means that the illustration and its associated ideas have never seen the light of day. 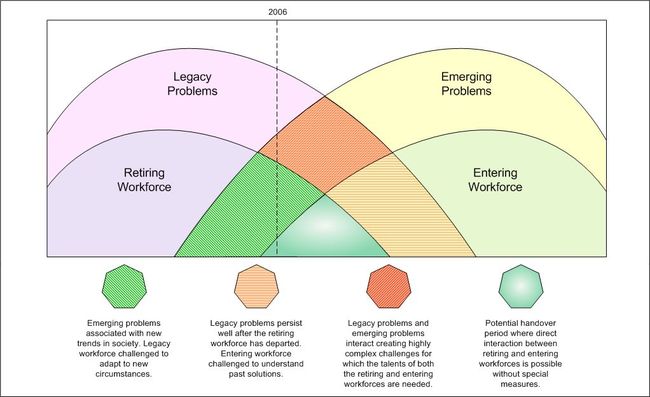 The illustration was entitled The Knowledge Preservation Challenge. The specific shapes used to construct the illustration carry with them potentially unintended meanings but in general the curves reflect the pattern of employment within the subject organization - in this case the Canadian Federal Government. Here, there had been a ballooning pattern of growth in the public sector for years until downsizing and retirement started to take its toll in the later 1990s. After several years of hiring freezes, the government has now embarked on a recruiting drive on such a scale that the city of Ottawa, the seat of Government, is bursting at the seams. These patterns create specific challenges and, as the illustration endeavours to show, opportunities.

The matrix that I found myself toying with was that along with the departure of the legacy workforce the government needed to recognize that there were a set of legacy problems to be addressed that were more often than not associated with legacy solutions. The retiring workforce was critically important to addressing this class of problem or at least in orienting the emerging workforce. There were also emerging problems associated specifically with the rise of new phenomena for which the emerging, younger workforce were best equipped. In both of these circumstances, the conclusion was that working on these problems in ways that require the legacy and emerging workforces to work together as the most pragmatic approach to preserving the knowledge.

Of course, being in provocateur mode, I threw in some more jaundice remarks. I questioned, for example, how much of what the legacy workforce knew could genuinely be defined as knowledge or whether it represented a nest of self-sustaining declarations that were best buried behind the barn. As at least some of my fellow panelists were senior public servants, you can imagine how popular these remarks made me. Partially to save my own skin and partially in recognition of the truth, I did acknowledge that I had myself benefitted from the mentoring of senior government bureaucrats in the Department of National Defence. But these people, I hastened to point out, were the last of the "war generation" who had learned a great deal by virtue of having achieved so much. To maintain my provocateur stance, I concluded that this respect should not be automatically transferred to the generation that succeeded them.