Content & Management
Giving Aristotle his Due
Modeling with Stickmen 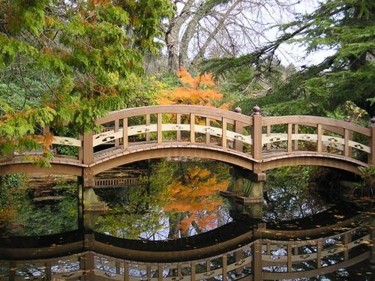 A quick survey of recent business literature will highlight the current prominence of "leadership" as a domain of interest. Exploring why this would be so at this time and plumbing the depths of what has been emerging as an interdisciplinary field of research are worthwhile tasks.

During a leadershop workshop in which I participated, a specific challenge was introduced for consideration. The challenge bundled together an all-too-familiar set of problems and did so with specific reference to the healthcare sector. Costs were spiralling out of control, the complexity of the services and infrastructure was outstripping current management mechanisms, and the community of stakeholders was expanding and growing more demanding. On top of it all, change was being introduced in every facet of the sector by uncontrollable demographic forces. Against this was placed the challenge: How can professionals working in this community muster their resolve and resources to respond? It was framed, with good cause, as a question of "leadership". 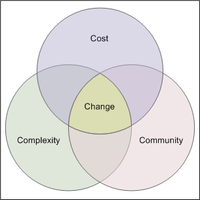 The magnitude of the challenge, both within the context of the workshop and on the larger plane of reality, was such that the most natural response was one of overwhelmed paralysis. It was a circumstance where a framework, and working set of definitions, would need to be introduced in order to organize information and initiate discussions. What was needed was "intellectual scaffolding" that would allow participants in any discussion to ascend to the various levels of the challenge where the details could be analyzed and solutions hammered out. This scaffolding was going to be an artifice but this should come as no surprise. What else could it be?

So just such a framework was introduced. This framework was drafted with reference to many of the themes seen within leadership literature. The first step was to introduce the above four-part breakdown of the challenge dimensions: cost, complexity, community and change. Making the artifice of the emerging framework clear, alliteration was embraced as a rhetorical device. A parallel model was then introduced under which a response could be elaborated along the following dimensions: innovate, integrate, involve and inspire. 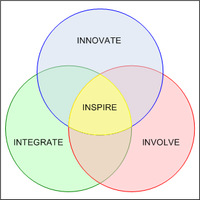 As an aside, in this leadership workshop I had consciously sought to downplay my role so as to allow others a greater opportunity to "lead" the efforts. But after a little time of earnest and interesting exchanges, it became very clear that some form of framework was needed to organize the many good ideas that were flying around. Breaking with my chosen wallflower role, I introduced this framework and it was immediately and, I dare say eagerly, taken up.

Some readers familiar with the nascent domain of leadership studies will even notice that the choice of colours used in the graphical illustrations of the framework echo those seen in many evaluative tools leveraged for assessing individual and organizational capabilities. In a way that is both uncanny and predictable, challenges and proclivities are frequently decomposed into quadrant models and these models all too often map interestingly to the four humours that ultimately descend to us from ancient times.

Given the specific association of this leadership challenge with the healthcare sector, the attractiveness of invoking Hippocrates (460 – 370 BC), the Greek founder of what we will call western medicine, proved irresistible. The framework provided by the four humours in fact offered more benefits than its advocate (yours truly) expected. By comparison to some of the alternative models available, all of which were associated with commercially licensed methodologies, the model of the four humours proved to be at least as informative and in many ways superior. And as any claims on the intellectual property manifest within the framework could safely be considered to have lapsed over 2,000 years ago, teams seeking a solution framework were free to mine this resource aggressively. 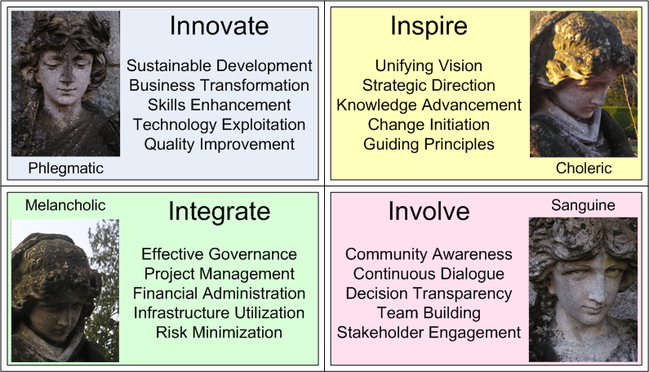 For the purposes of this effort, the framework expressed with the four humours, as used by Hippocrates, offered a very functional tool for organizing the concepts and positions associated with establishing a leadership strategy for the healthcare sector. Indeed, it can, as it has in this particular case, been generalized to apply to all discussions of "leadership". Applying the framework had some interesting effects such as helping to differentiate between areas of focus that might otherwise be lumped together. And with these differentiations, the various areas became associated with specific types of leadership roles. The overt recognition that there are different types of leaders and that any significant undertaking will call for a balance to be established amongst these leadership roles illustrates how harvesting historical models and leveraging them as artificial scaffolds can yield significant benefits for even the most modern of initiatives.