Content & Management
The Barnaclization of Systems
Tinsel and the Tree

The Strength of Diversity

Canals in the Oxford University Parks 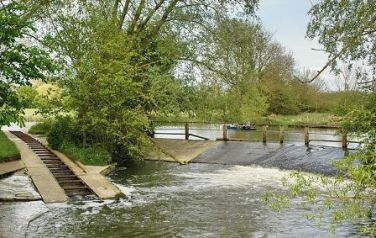 Being in Oxford has reminded me of an interesting saga that I recall watching play out in the University Parks and in particular in the area affectionately known as Mesopotamia. I used to walk although the pathway that is bounded on both sides by canals, hence the name, and a regular feature of the canals was a gaggle of around 50 Canada Geese. Needless to say this gaggle made me feel at home and I liked to imagine that they would follow me for part of the journey. They actually did because they had long since learned to watch for free hand-outs of bread from passersby.

Now Canada Geese are quite interesting. They are well organized, with different geese taking turns on watch while the others eat and, when flying, they regularly switch leaders to share the workload. One of their more charming traits is that they will assign two healthy geese to stay with any goose that has become ill or injured and these care-givers will stay with that goose until it recovers or dies. All these virtues did not, however, make the Canada Geese the lords of these particular waterways. This title went to the larger, more flashy and aggressive Swans. Any illusion one might have about the true nature of Swans is soon dispelled by regular contact. People who decide to feed the ducks from their punts on these canals soon discover which birds will take all the bread, whether it is volunteered or not. In fact, this is true throughout this particular ecosystem – the swans dominate the food harvesting process. That was until one day when a stranger came along.

This stranger was a monstrously large English Goose. At the time, I recall naming this particular animal the “Arnold Schwarzenegger of Geese”. In terms of size, it was easily twice the size of the largest Canadian Goose, its neck seemed to be thicker than its head, and, strangest of all, the end of its beak featured some form of digging appendage – a huge toe-nail of sorts. So there was no questioning the fact that this newcomer was the ugliest creature on webbed feet. 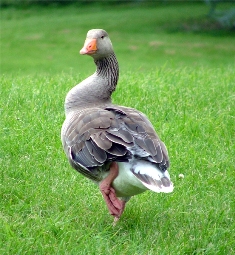 Not surprisingly the gaggle of Canada geese wanted nothing to do with this mutant goose however much this outcast wanted to join the team. For several weeks, this grey English goose followed behind the Canada Geese, seemingly having decided that they represented the closest thing to kin. It was, throughout, a spectacle of a homogeneous community spurning the outsider. To its enduring credit, and possibly why it earned its name, this English goose was simply too stubborn to give up and it continued to shadow it chosen clan.

Then one morning came along that stands out vividly. The gaggle of Canada geese were drifting along the water, as usual, except this time, right in the middle could be seen the monster English goose. Something had changed and it was not long before I discovered why. There was a group of swans enjoying some nutritious find when the new, augmented gaggle of geese rounded the bend in the canal. Whereas in the past, the geese would have kept their distance from the larger swans this time they picked up speed and headed directly for the swans. It turns out that this English goose, in addition to being ugly and awkward was also totally unstoppable. I can recall the image of this particular goose crashing into the swans like a bowling ball impacting a set of pins. A tremendous racket followed and lots of wings flapping but there was no overcoming the Arnold Schwarzenegger of Geese.

There is no way of telling how long the alliance lasted but what is sure is that for a period of time on the canals of the Oxford University Parks a hodgepodge gaggle of geese enjoyed complete dominance. To this day, I cite this story as an example of how strong diversity can be. In this case it was not merely a matter of looks but a fundamental diversification of inclinations and capabilities and the lesson applies as neatly to people as it does to our feathered friends.

What would have happened with the French revolution and for that matter with our contemporary history if they have simply added the strength of "Diversity" discovered by our Canadian geese to their "Equality, Liberty and Fraternity" cry?

This is a fascinating question.

Taking up the French Revolution first, I would imagine that the incorporation of "diversity" into the battle cry, and the associated esprit, would have taken that uprising to a quite different conclusion. The downfall of the French revolution - its literal degeneration into a bloodsoaked farce followed by the despotism of a diminutive artillery officer - can be attributed to successive waves of insularity overtaking different groups who found themselves, for a short time at least, in power. This impulse towards insularity, as the exact opposite of welcoming diversity, kept the guillotine well supplied with customers for many years.

There are, of course, similar examples that can be cited and we could go forward or backwards from the French revolution in history to find them. There definitely seems to be a tension between "diversity" on one hand and "unity", or forms thereof, on the other. I suppose "unity" can be equated to "fraternity" in the French revolutionary version and the question that arises is what distinquishes constructive unity from destructive insularity? What then is the dynamic that leads communities towards constructive, inclusive unity and away from what would appear, at least historically, to be our more normal and more destructive state?

THANKS Joe. What a fascinating response that was.

I fully agree with you that "unity" can be equated to "fraternity" that in turn can be formulated as a relative "us".

On the other hand this "crisis of globalization" that we are currently experiencing, and is wrongly interpreted by most of us as a simple economical problem, is a very serious "cultural" problem due to the lack of "ONENESS" that can be equated to "diversity" that can in turn be formulated as "ALL OF US".

This is exchange Jose is sparking a number of ideas and, before long, will likely lead to at least one new post.

When we think about the current global economic mess, and about the changing forms of "globalization", we are reminded that many unities exist. Sometimes they compete and sometimes they collaborate. At other times they conflict and at yet different times they merely co-exist. If a unity is defined by its end, its purpose, then we see how some unities will be constructive while others may be profoundly destructive.

If we take the current economic crisis as one case, there are a myriad number of contributing factors that can be highlighted. The most important one, I believe, is the formation of a particularly selfish unity around which a large portion of the world's economy has been wrapped in the last 20 or so years. This unity is (and this is probably going to get me into trouble) the baby-boom generation in North America, and to a slightly lesser extent western Europe. This generation has been charting a steady path towards the golf course and has been attempting to pursue a retirement from labour similar to, but aggrandized upon, that taken by the proceeding generation (who I refer to as the war generation, and who, I would add, earned it and undertook it in part ot make way for the succeeding babyboomers).

This process has driven an investment market and a hunger for continuously improving returns extracted from continuously expanding growth. In turn, this spawned a business culture and process that became progressively more refined, abstract, calculating, and relentless. I usually refer to the business culture in question as the "MBA culture" (and thereby getting me into even deeper trouble). This process continued until cracks started appearing in the foundations underpinning the resulting financial edifice.

Under this process, what passes as globalization is actually a subversion of it - with one particular unity driving its interests over those of all others. This process doubtlessly caused much hardship during its growth and, as we are seeing, still more as it falters.

It would be preferrable for there to be a process and a governing model that accommodated more unities and that facilitated better competition and collaboration (with these two things being less far apart than is often imagined). This would constitute of unity of unities, if I can call it that.

The path towards a better model however is not likely one that tries to ignore or overthrow a unity as massive and formidable as that which holds sway today. It would be more practical, I would submit, to advance modifications to the model that facilitate inclusiveness and improve the constructiveness of the entire operation.

In exchanges in the past with colleagues from around the world who raged against the reigning world order and sought to advance wildly different ones, all I could add in the end was a rather omninous "good luck with that". History has been very harsh with overly abrupt diversions from the momentum of events - with the French Revolution providing only the most comical example.

There is, however, real hope that change can be realized and that we can make concrete steps towards a constructive global unity - even if the path towards this goal is different than many might suspect. And it may be that the current troubles provide an opportunity to effect some of the necessary changes.

I am not talking about the need for global revolution because that would simply be fighting over an impossible global "new way of doing", and a new and awaiting Napoleon (global this time) might profit from the subsequent blood shedding.

Our real challenge as Humans is to Accept our Diversity and Find our ONENESS "beyond" our multiple though partial economic, political, social (religious included) and cultural "unities".

We are Looking for a Global Human Way of Being.

Yes, Jose you are right - on both counts. And I appreciated this from the outset. My reference to some of the more extreme cases of "revolutionary fervour" was rooted in my own encounters (usually within academic circles) with a line of thinking that manifestly did not appreciate the consequences of abrupt change or the attendant risks. Again, finding the unity in unities is the only way. A constructive global unity would be one that seeks to built and sustain an environment that accommodates and encourages distinctive unities, that even hatches new ones, and that facilitates fair and productive interactions amongst them all. Globalization with a human face.