Tinsel and the Tree

This reflection is drawn from a long time ago. Twenty-five years ago to be exact. I was attending a talk by a then (and still) famous Canadian author with this event being held in Grant Hall at Queen's University in Kingston, Ontario. The gathering was very well attended and Grant Hall was in fact packed to the rafters. It was something of a celebration of the success achieved by this author and it should be added that the celebration was well deserved.

There was one part of this particular evening that remains with me and it has ultimately prompted this post. As part of the talk, this author embarked on a digression that, by a backhanded route, sought to throw support behind the university's fledgling women's studies program. It was backhanded in so far as the speaker decided to contrast the virtues of this program with what would have been the male counterpart where study would have been directed to military uniforms, medals and atrocities. Many in the audience found much humour in the remarks. Being a member of the Canadian Armed Forces, I was a little less enthused but I was not especially upset. By chance however, my eyes fell on the far right of the front row of the seating area and I noticed an elder gentleman sitting quietly and attending to the speaker with evident care. The comments quickly turned stale.

The elder gentleman was Judge John Matheson, who had also been the honorary colonel of my regiment during my early years in uniform. Prior to that night, I don't think that I had ever seen Judge Matheson except when in uniform, with his numerous decorations visible to all. 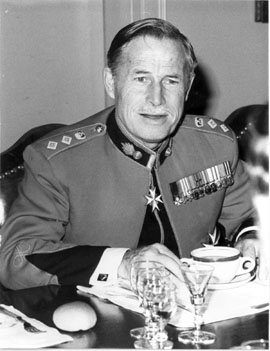 The contrast between the artist making the remarks and the retired soldier was inescapably stark. Colonel Matheson, I knew full well, had been badly wounded at the Battle of Ortona in the Italian Campaign of World War II. He was so badly wounded that he was initially triaged as "dead" and then, in hospital, he had been told that he would never walk, work, or have a family. It is an understatement to say that he proved them wrong on all counts. He returned to university, married, became a Member of Parliament (MP), led the initiative to establish a new flag (he is regularly referred to as the father of the Canadian flag), initiated the Order of Canada (by which Canada recognizes civilian contributions, including ironically those by the speaker at this event), served as a court judge, and continued to actively support his military regiment and university. For the fiftieth anniversary of the Battle of Ortona, he was instrumental in convening a gathering of former Canadian and German combatants so that they could bury forever the conflicts of the past. He is, in many ways, an embodiment of the very best in what people can achieve over a long and varied career.

It was in contrast to this life story that the shallow criticism of militarism looked so ridiculous. Now the speaker was unaware of his presence or his history and too much should not be made of the comments. It did not appear, from my vantage point on the balcony, that Judge Matheson was at all put out. The contrast does remind us however that there is a massive distinction to be made between those who decorate history with their artistic contributions, valuable as they are, and those who by industry and sacrifice effectively constitute history. While it rings a little too harshly in its handling of artists, and their contributions, it is difficult not to say that there is a big difference between the tinsel and the tree on which it hangs.

Looking back, I think the lingering impression of this event is entirely one of respect for the contributions of people like John Matheson and a marvelling at how any one person can undertake so much.

"The oldest hath borne most: we that are young
Shall never see so much, nor live so long."
- King Lear

In 2009, a gate to Canadian Forces Base Kingston was named after John Matheson. It may be a small gesture but it does underscore the fact that some people remember.

On December 27, 2013, John Matheson passed away in Kingston, Ontario, at the ripe old age of 96. Some very good tributes to him appeared in various press channels, most focusing in on his role as the "father of the Canadian flag". One of these cited a recent interview in which he recounted the one thing he was most proud of. It was not the flag, or the Order of Canada (designing or receiving), or his time as a Member of Parliament (back when that could still be something to be proud of) - no, it was a particular decision he had brought down as a judge. In that decision, he had sided with a severely disabled young man and agreed that this young man had the right to determine his own future. Judge Matheson observed that while his physical condition would not change "certainly his mind could and his spirit and his soul could. It would be wrong to think of him as being a limited human being." The judge's words here would have carried great weight because he was himself a shining example of what is possible when people set their minds to overcoming challenges.

With his passing at the end of a year in which politicians and plutocrats of various stripes showed themselves to be contemptible, the example of John Matheson, MP, Colonel, Judge, and startlingly accomplished designer, as well as the great and generous soul that I remember so clearly, stands as a beacon of hope and as a reminder that we do not need to accept the present state as our fate. 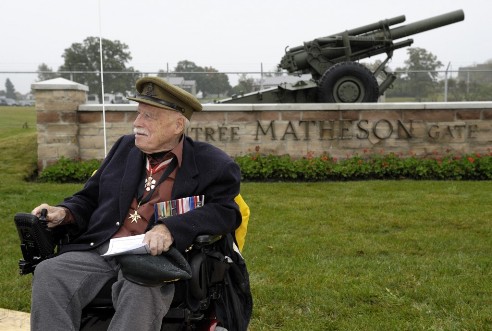