The Flying Island of Organizational Consultants

Encountering organizational consultants is far from unusual. Most organizations feature a cadre of preferred advisers on such topics as process change, business transformation or knowledge management. In some cases they even contribute value, or at least that is a hope we can hold out. However, there are occasions when encountering organizational consultants in the wrong context can be a jarring experience. This post recounts one such encounter. 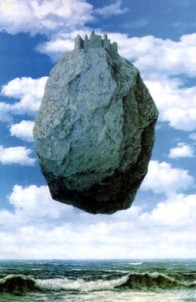 I was participating in a governmental working group on knowledge management. On this occasion, we had a guest speaker who was to speak about a KM initiative for a inter-jurisdictional agency focused on addressing serious public emergencies. The agency, it turned out, was a component of the Canadian Department of National Defence (DND). Having some awareness of this organization and how it worked, I looked forward to the presentation.

It did not take long before my interest in the presentation began to cool. Work on the justification model used to demonstrate the value of investing in organizational learning events was covered (see my post on the KM Uncertainty Principle). Experiences were then related on the successful inter-organizational learning events that had been conducted and how they validated the justifications. I don`t think I did a very good job concealing the look of puzzlement on my face as I pondered how any of this was different from what in the military we had always called "exercises". And then the presentation took the strangest of turns.

The question, rhetorical it turns out, was posed: "Why are the insurgents winning in Afghanistan?" It was a rhetorical question because the answer followed on immediately, and delivered with the consultants slowly nodding their heads in uniform agreement - "Because they talk." A set piece then followed that revisited the importance of verbal communication, personal contact, and team-building experiences - not to mention freedom from artificial formalizations. Throughout all of this I am sure that my mouth was simply hanging open.

I looked around the room hoping to see a similar reaction amongst representatives from the Defence Department only to realize that those representatives were themselves civilian staff whose exposure to the military per se was effectively nil. With a substantial measure of restraint I weighed into the discussion. As luck would have it, I was able to reference a very recent event that highlighted the key omission that had been made in the thinking of these consultants. I had literally just returned from the homecoming parade for the 1st Battallion of the PPCLI as it returned from a particularly grisly tour in Afghanistan.

The point I managed to make, I believe, was that the entire presentation and, in particular, the comments about the value of "talking", was predicated on the faulty notion that the bureaucracy of National Defence Headquarters represented the military that was undertaking these missions. In fact, this headquarters environment could not, indeed should not, be taken as representative of the long-standing and repeatedly-proven leadership and learning practices of the field regiments - the ones who actually undertake the missions.

I took the above photo during the homecoming parade and a careful examination will show that the ranks are littered with empty spaces - of which two are plainly visible in the foreground. These are the spaces left by the fallen. In fact, the back page of the local newspaper was filled with pictures of those who had paid the ultimate price. The front row in the spectator stands was then filled with the wounded. It had been, as I noted above, a grisly tour.

Participating in this homecoming was, perhaps oddly, a hopeful affair as the young soldiers mixed with the past generations and the "regimental family" pulled even closer together the more challenging the circumstances became. The deep processes of learning and, if you will, talking, were in evidence and they were being used to address a myriad of needs.

By comparison, the facile observations of the organizational consultants seemed at best comical and at worst cold. In a way, it is difficult to judge them too harshly as the bureaucracy of headquarters was the only environment they knew and nothing in their experience would have exposed them to reality. In a very real sense, they did not know that the regiments even existed. They were, in many ways, like the distracted scientists on the flying island of Laputa in the third book of Gulliver's Travels - hopelessly out of touch and blissfully unaware of the fact.