At the Lavacon 2013 Conference, I gave a lunchtime keynote address entitled "Breaking Bad Content". It being a lunchtime keynote, I opted to do a few things differently. Perhaps most striking of these was appearing on stage more-or-less in character as Walter White. The other was adopting a presentation format that relied almost exclusively on images from the famed AMC television series "Breaking Bad". And related to the reliance on images, I also deployed a number of stories as a way to illustrate some of the core themes. All of this was intended to work with the lunchtime keynote format where people have some other things on their minds - namely lunch (which at Lavacon tends to be pretty good). 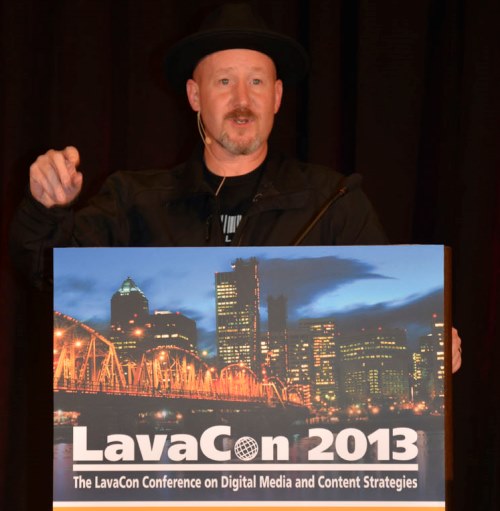 I was also thinking that Breaking Bad Content might be a good way to summarize some of the themes that are apparent in the worlds of content management, content strategy and content technologies. This is partly appropriate because I sort of kicked off 2013 with a warning that I was going to dedicate the year to chasing down and exposing the sources of bad content which seem to be so difficult to root out. To unleash something of a spoiler (at least in regards to my presentation), the source of bad content is almost invariably the deployment of unbalanced investments that focus on one or two aspects of the content lifecycle to the detriment of the overall lifecycle integration that is in fact essential if good content is to be produced, sustained & leveraged. 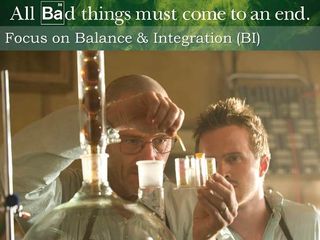 In my presentation, I explored several dimensions of the proposition that good content is achieved, and bad content avoided, through a focus on balance and integration that keeps in view the entire content lifecycle. And a complete content lifecycle is one that connects all content sources to all possible content uses. One dimension that was explored, and which is becoming increasingly acknowledged as critically important, is the constructive role that measurement and analytics can play in helping to establish an enterprise content lifecycle viewpoint and in exploiting that viewpoint once it is established. 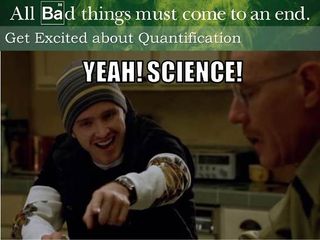 Another dimension that was explored was the character of the content technologies that are called for in a virtuous cycle of good content. This was raised because it is surprising how often the investments made in content technologies in fact get in the way of creating and delivering good content. And this comes up, once again, due to imbalanced investments that over-emphasize, say, the management infrastructure that will control the content assets and the content processes that will operate on them. In such cases, the ill-effects of this imbalance will be seen in an under-investment in the content delivery and engagement infrastructure with the consequence that the content customers will be less well-served than they might have been. Another point made in this exploration is that all the content technologies being deployed must be optimally maintainable and extensible so that the environment can be sustained and evolved along with changing business requirements. These technologies must not, first and foremost, become a stumbling block to progress. 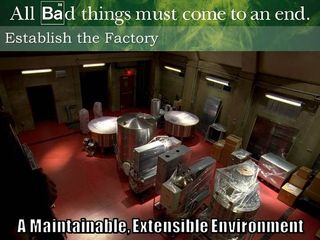 Yet another dimension that was explored, and in fact that received a preponderance of attention given some of the other talks at the conference (and generally within the Content Strategy community), was the relationship between good UX Design and Bad Content. Using one particular example, of a host of possible candidates, I sketched out a real-world case where 20 years of aggressive and generally earnest investment in good UX Design has resulted in one of the world's worst online presences (for a larger institution). In this particular example, it was recalled how the very best and brightest from the UX Design community were engaged at regular intervals over a 20 year period, and in conjunction with monumental investments in the state-of-the-art in web content management technology and implementation techniques. The result of these investments has been abysmal. About the nicest thing that you can say about it is that is was, and remains, a disaster.

Amid a new and ongoing effort to fix this situation, this time once and for all (naturally), I have noted the same patterns at work as before. This leads, somewhat inevitably, to the logical conclusion that the results will likely be the same as before. (In truth I have had exposure to these most recent efforts just as I did over the entire 20 year saga - with my role from the beginning in around 1993 being one of regularly questioning the investment strategy being pursued while aggressively implementing content-driven alternatives within specific environments.) In exploring this dimension, I was able to make use of the delightful character of Saul Goodman who comes with, fortunately enough, an outstandingly repellent, but potentially effective, UX Design. 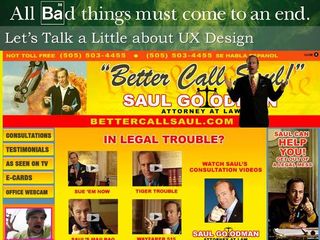 My question at this point in the presentation is a little depressing. What if abysmally poor information services are a result not of a failure to apply the best practices and tools of good UX Design but are, instead, a direct result of the application of those practices and tools? And what if the deeper implications of an over-emphasis on the UX Design has been an ocean of bad content - riddled with redundancies, errors, trivialities and worse? (It was at this point that I picked up, and lambasted, the proposition that had been made earlier in the conference that content strategy was best understood as part of, and subordinate to, the practice of UX Design - a proposition I contend is fully absurd.) I did hasten to add, in part so that I was not burned at the stake by a mob of angry hipsters, that in reality the problem lies in the lack of balance and not in the practice of UX design in itself. As argued previously, it is imbalance in investments, leading to poor or non-existent integration, that is the real problem and the real source of bad content. To make my point, I noted that Saul Goodman is perhaps the most attractive character in the whole series and he is absolutely essential to Walt's success. 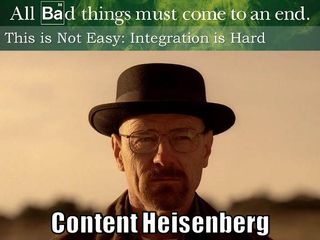 We thus return to the basic question of how do we break the cycle of bad content. The answer is simple but challenging. It is in pursuing improvements in the entire content lifecycle, using balanced investments in the content, in the content techologies, and in the information services being enabled, that good content is realized, sustained, evolved, and leveraged. And this calls for integation and this, in turn, calls for strategies that are genuinely enterprise in scope and scale. It calls for strategies that encompass all aspects of the content lifecycle and the facilitating content technology infrastructure. Like we saw in our example of abysmally poor information services underpinned by equally abysmal content holdings, among the challenges that organizations face today is the difficulty of assembling teams for their content innovation initiatives that can address the full spectrum of their content requitements. And part of this challenge lies with the difficulty of finding, and then tapping into, sources of real implementation experience when it comes to deploying enterprise content solutions (with "real" referring to actual implementation responsibility as opposed to the passing involvement of consultants, salespeople or blue-sky strategists). Even with this expience on hand, it still comes down to the challenge of framing and then executing a content strategy that actually has something to do with content and that can legitimately be called strategic. It is, in reality, a challenge that the entire content industry faces and that it is only now mobilizing to respond to.

A couple of days before I delivered this talk, I was told by a good friend that I needed to nail this particular presentation. I needed to nail it because the "Breaking Bad" meme was entering into steep decline now that the show had come to its conclusion. Hopefully though we will be able to salvage some parts of this message so that the "breaking bad content" meme, or some facsimile or a more evolved form of that meme, can go on and be used to continue exploring these questions. Judging from my newest coffee mug, it doesn't look like I will be giving up on this theme any time soon. 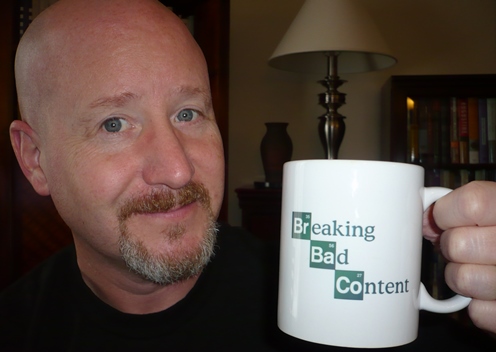 An edited recording of the keynote follows: